Brian Horne and Stefan Schwarz are ex-professional footballers who have many years in experience in the football industry.

With an excellent knowledge of Portugal and its training facilities both Stefan and Brian realised that the opportunities for European and Scandinavian clubs to play competitive friendly games in Portugal was very limited. After identifying this gap in the market, the pair set up The Atlantic Cup which has gone on to enjoy eight very successful years. In 2018, Stefan Schwarz decided to step down as as organiser and now acts as an ambassador tor The Atlantic Cup.

With the reputation of the tournament ever-growing, and also the introduction of The Dubai International Cup, Sporting Events are delighted to announce the return of The Atlantic Cup in 2020.

An England youth international who went on to win five under-21 caps, Brian Horne kept goal in almost 200 games for Millwall and made 244 League appearances during his career. A fine shot stopper, he did the Lions proud with some excellent displays during his time at the Den.

Brian played for the following clubs: 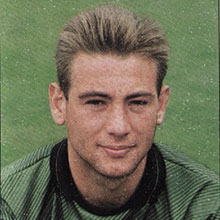 Hans-Jürgen Stefan Schwarz (born 18 April 1969 in Malmö, Sweden) is a Swedish former footballer. Born to a German father, he played as a midfielder and a left-back. He started playing football at youth level in Kulladals FF and began his career at his hometown club Malmö.

In 1990 he played as a youth player in Leverkusen before moving on to Benfica where he played from 1990 to 1994. He also played for Arsenal, Fiorentina, Valencia and Sunderland. The most prestigious award he received was Guldbollen, 1999, as Sweden’s best footballer during that year. He was capped for the Swedish national side on 69 occasions (6 goals). He formed a highly rated midfield partnership with Jonas Thern when playing for both the Swedish national side and Benfica. 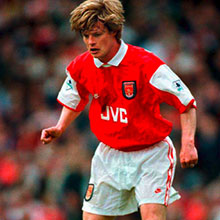