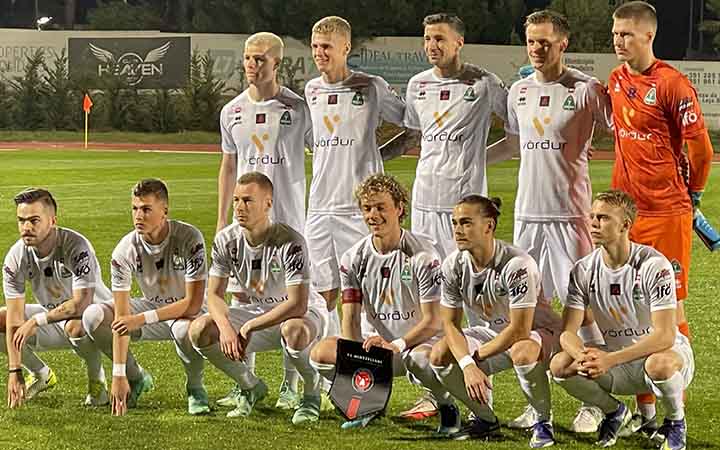 This really was a game of two halves. Although Breidablikk got the first big opportunity of the match, a good finish from Hoskuldur Gunnlaugsson, who was masterfully saved by David Ousted, this was Midtjylland's half. It took only 11 minutes before the Danes scored the first goal, a simple chip from Marroney. Six minutes later, Victor Lind's free kick from outside the box was deflected and it totally outmaneuvered goalkeeper, 2-0. Lind and Midtjylland continued to dominate and after 33 minutes, 18-year-old Lind scored again. The Danes could go to the break with a comfortable 3-0 lead after a very good first half.

Midjylland had replaced the entire team from the match against Zenit, and it was a young team with experienced Wagner Love as a striker and Paulinho as captain. After the break, Bo Henriksen made one change while his colleague Oskar Hrafn Porvaldsson, who had only made one change from the victories against Brentford B, replaced three players.

If the Danes was dominating the first half, now was the time for the Icelandic boys. 0-3 was turned to 3-3 thanks to goals from Kristinn Steindorsson (53.min), Gisli Eyjolfsson (82.min) and Benedikt Warren just two minutes from the end. That ment that it was time for a penalty shoot out. Breidablik scored on all there penalties while the Danes sendt one shot over the bar. That means two points to add tho the three they got against Brentford B.

The match, which was a tough fight with two engaged coaches on the sidelines, was played in floodlights on a good pitch at Estadio Municipal de Albufeira.