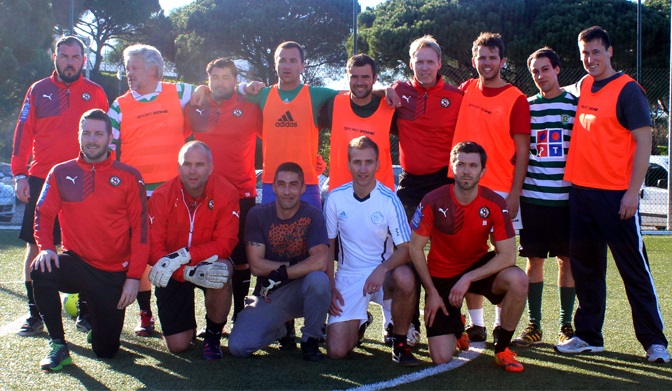 Örebro are in the final of The Atlantic Cup 2015 after two wins against FC Midtjylland and Brøndby. Today the management, coaches and staff from the club defeated their hosts from Browns Sports & Leisure Club after an epic match.

For many the match between the staff and management from Browns Sports & Leisure Club and the coaches, staff and management from Örebro was an even bigger game than tomorrow's final of The Atlantic Cup. The pitch was in perfect conditions, the fans were cheering and the sun shined down upon all of us from a clear blue sky. The football level of the 2 x 20 minutes match was brilliant and it was an intense match. Nobody clearly wanted to lose this one.

It was the away team that got the best start. A deflection tricked Browns' keeper and Örebro soon doubled their lead. The goal this time came after a wonderful chip from the smooth Magnus Sköldmark. Many remember him from his time in Dundee United and the silky smooth Swede hasn't lost his touch.

Browns did have their fair amount of chances in the first half, but they faced a Nordic giant in goal. It was like shooting the ball against a wall at times and it clearly frustrated the hard fighting home team. Örebro not only defended well with coach Alexander Axén playing like Franco Baresi, Lothar Matthäus and Franz Beckenbauer all rolled into one magnificent player they were also ruthless in front of goal. Clinical finishing that the likes of Martin Dahlin, Henke Larsson, Zlatan Ibrahimovic, Gunnar Gren, Gunnar Nordahl and Nils Liedholm would have been proud made sure that it was 4-0 at halftime.

Örebro gave it their all today and in the second half they quickly made it 5-0. Browns never gave up and they almost started believing when they pulled two goals back. It wasn't to be though and it ended 6-2 for the visitors.

Watch the build-up, the highlights and the reactions here:

Enjoy the best goal of the game from the MVP of today's game: